Would you believe it if i told you there isnt even a single detailed outline map of this country which is free. I didnt, until a research scholar from IITM approached me for a map to help in a document he his preparing for a government sponsored project – the national knowledge network (what an irony). Imagine, even the professor in charge  has been contacting various government agencies to get hold of a district map of the country because there is none available online.

This is something that the government should have done, but since they seem to think that the band of jokers at NIC are competent in the field of information technology,  its upto citizens like us to save the face of this nation. We may call ourselves the exporters of IT to the world, but when it comes to providing its own citizens with even a tiny amount of useful detail, we fail miserably.

Hence i am releasing the vector base map data of India that includes international, state and district boundaries, into the public domain. This should be of benefit especially to academicians and students who uptill now had to make do with watermarked, low resolution maps for their work. This is the same data that was used to create my other maps on wikipedia. 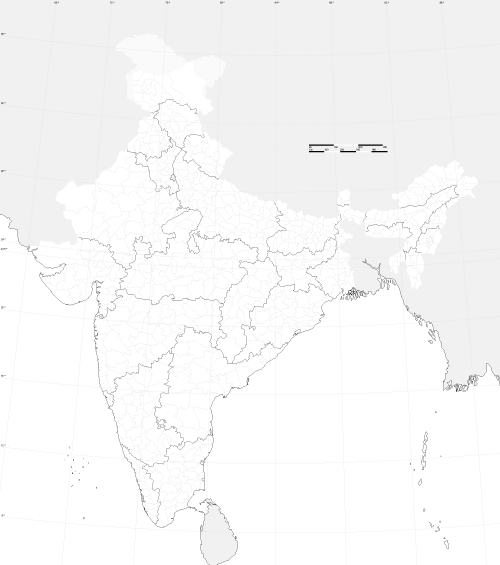 To fully customize the map, use a vector editor like Adobe Illustrator or inkscape (free), to style the map according to your needs.